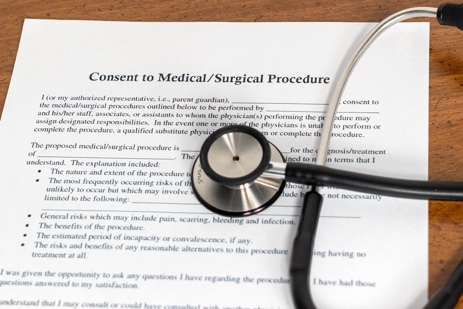 When someone suffers an injury as a result of negligence by a medical professional, they only have a certain amount of time to file a claim. In fact, each state has a different set of rules on filing lawsuits. These rules and regulations are legally referred to as “statutes.” In regards to medical malpractice cases, statutes vary from state to state. The statute of limitations on medical malpractice in Florida is not always cut and dry; various factors are involved in determining the amount of time someone has to file a suit.

This article will discuss the amount of time someone has to file a medical malpractice suit, exceptions to this rule, and other pertinent information regarding malpractice claims in Florida.

How Long You Have to File a Claim

According to Florida Statute 95.11(4)(b), a person must file a medical malpractice lawsuit within 2 years of the date the harm from the malpractice was discovered, or could reasonably have been discovered.

There are only a few exceptions to this rule so it’s important to contact an attorney immediately if you suspect that you or a loved one suffered injury due to negligence by a medical professional.

Of course, some injuries are not immediately apparent. For example, a patient may be experiencing constant abdominal pain and a doctor sends them home with pain relievers. Later the patient’s appendix ruptures and the patient becomes septic and dies. That case may be one for extreme neglect and/or malpractice. Other times a patient may go in for limb amputation and the wrong limb is removed. Naturally, that horrific example is definitely medical malpractice.

As alluded to above, there are certain exceptions to the “two year rule” on filing a claim. You can read more about these in the next section.

The two year statute of limitations may be extended to four years in cases where an action was not immediately discoverable. In Florida, a patient has up to four years from the initial occurrence of the medical malpractice incident. However, after four years only fraud and cases involving minors may be considered.

Cases of fraud or concealment allow exceptions to the two year rule. In fact, once the fraud or concealment is discovered a patient has an additional two years from the time of discovery. It’s important to note that no case may be filed if the medical malpractice occurred more than seven years ago. So, if the fraud is uncovered eight years after the unfortunate incident, it is probably too late to file a lawsuit.

The statute of limitations in regards to minors does follow different guidelines. A variety of laws protect children as many injuries may not be apparent until a child matures. For example, oxygen deprivation at birth may lead to cerebral palsy, learning difficulties, and various physical/mental challenges for a young child.

Parents may begin to notice that their child is not meeting typical milestones that are expected for developing toddlers. At this time, parents may question what happened during childbirth. Was the doctor or medical staff negligent? Contacting an attorney as soon as you notice significant problems is vital. Medical malpractice claims may be filed within two years of discovery until the child is eight years old.

Not Every Medical Injury is Considered Malpractice

It’s important to note that every sad event in a hospital setting is not always considered malpractice (see reasons a medical malpractice lawyer won’t take a case).

Sometimes natural causes are the reason for a person’s death. During difficult, traumatic times people may want to blame someone for a tragic loss.

For example, sometimes babies are stillborn despite every modern precaution and the best care. It’s a rare event: but, it can happen. Also, despite medical personnel following proper procedure and providing excellent care; sometimes nature has other plans and people pass away. If you are in doubt about a medical occurrence in a hospital, or with your doctor, you should obtain legal advice as soon as possible.

Here is a quick recap and summary of the content discussed within this article.

– Two years is the standard statute of limitations on medical malpractice in Florida.

– This may be extended to four years in cases where the injury wasn’t immediately discoverable.

– The only exceptions after four years are for cases involving fraud or concealment.

– Cases involving minors have their own set of guidelines determined on a case-by-case basis .

– Not every medical injury is considered malpractice.

– It’s always best to obtain professional legal advice as no two cases are the same.

In summary, if you’re thinking of pursuing a possible malpractice claim you should do so as soon as possible since numerous statutes limit when and how long a person has to file a lawsuit. It’s extremely important to work with a lawyer who specializes in medical malpractice claims to ensure your case is properly handled and you obtain necessary compensation for injuries.