When it comes to medical malpractice lawsuits, each state has their own individual laws. These laws include the amount someone can receive for damages as well as the statute of limitations on filing a claim.

In June, 2017, the State of Florida ruled against imposing an economic cap on medical malpractice claims in a Supreme Court decision. Specifically, The Florida Supreme Court ruled:

“Policy that relies upon discrimination against Florida families is not rational or reasonable when it attempts to utilize aggregate caps to create unreasonable classifications,” and struck down the law.;”

In other words, capping the monetary amount someone can receive for damages was ruled “unconstitutional.” 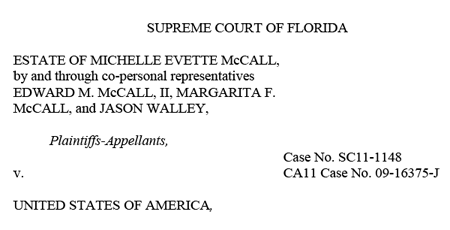 Ultimately, Ms. McCall delivered a healthy child. However, the medical staff failed to timely notice that Ms. McCall lost a lot of blood giving birth. As a result, Ms. McCall lost consciousness and died on February 27, 2006.

Appeal to the 11th Circuit Court of Appeals